Saturday I went to a party to celebrate the 50th anniversary of my aunt and uncle.  Sometime during the afteroon I decided that the card I was going to give them was not good enough so I sat at my desk to make a new one - with the help of the "cheer" challenge at CASology and the "shine" challenge at Less is More. 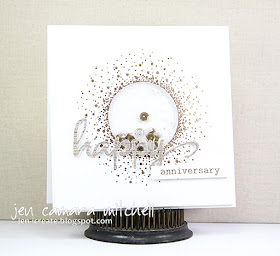 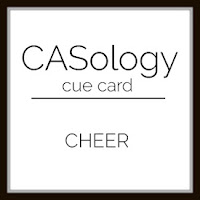 This card was sort of reverse engineered from the envelope!  I had a card all picked to give them and made a festive envelope to go with it with gold embossed accents and the word "cheers" featured right in the middle.  I chose gold because traditionally, that is the color of the "golden" 50th anniversary.  The envelope looked fantastic, but the card I was going to use had no gold on it so the two looked terrible together.  Luckily I had some time in the afternoon before I needed to leave so I made this shaker card.  Much better!  Here's the envelope that inspired my card: 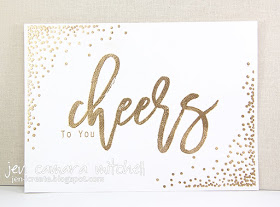 Thanks for stopping by!

Thanks for taking the time to leave a comment. And just IGNORE the ROBOT REQUEST - pretend it's not there and your comment will publish like normal!